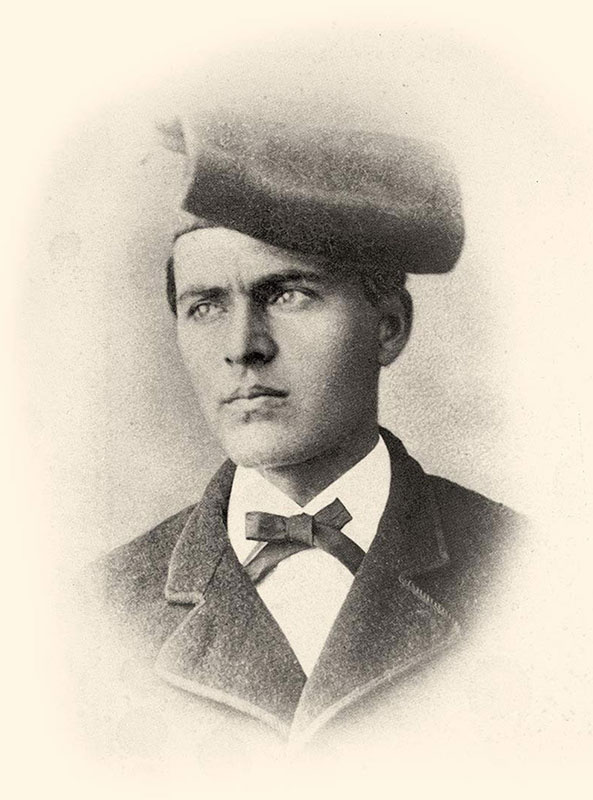 Jacint Verdaguer i Santaló (1845-1902 ), a romantic writer and a key figure in the Renaixença, is regarded as the founder of modern Catalan literature. His most prominent works, which have been translated into several European languages, include L’Atlàntida, Canigó and En defensa pròpia.

He was born on the 17th of May 1845 in Folgueroles (Osona) to a humble yet somewhat cultivated peasant family. His mother taught him how to read at a very young age. When he was 10, he entered the Seminary of Vic, where he studied religious subjects for fifteen years. He was intellectually formed in the city of Vic in contact with teachers and friends and in an atmosphere of cultural resurgence, and he read the Greco-Latin, Italian, French and Spanish classics. He began to write, and at the age of 20 he won his first award at the Jocs Florals (a Catalan literary competition) of Barcelona, where he met prominent figures from the world of culture such as Marià Aguiló and Manuel Milà i Fontanals. He founded Esbart de Vic, which was made up of a group of enthusiastic students with romantic ideas and sentiments; they would meet at the Font del Desmai to practise poetry.

As his companions were travelling abroad to further their education, he was ordained a priest and sent to the small parish church of Vinyoles, where, alone and isolated, he worked not only as a vicar but also intensely on L’Atlàntida. This is also where he contracted tuberculosis, and he moved to Barcelona to regain his health.

In Barcelona, he found work as a chaplain aboard the steamship of the Companyia Trasatlàntica, which was owned by the Marquises of Comillas. He spent almost two years crossing back and forth to the Americas nine times (on the Cuba line), a period of balance he needed to restore his health and complete L’Atlàntida, which won the Jocs Florals in 1877 and achieved immediate, resounding success.

Thus began a string of successes. In 1876, he started living in the palace of the Marquises of Comillas on Barcelona’s Rambla, where he worked as the family chaplain and later as their almoner. He took numerous journeys accompanying the family on health and business trips. He worked on a new epic poem on the origin of the Catalan nation, Canigó, which was published in 1886. Despite the utter triumph of the poem, after a voyage to the Holy Land he fell into a spiritual crisis which would lead him to prefer Church work.

The conflict stemmed from his relationship with the most disadvantaged population of society and his presence in a house of exorcists. The authorities were displeased with this behaviour: the Marquis decided to do without his services, and Bishop Morgades ordered him to return to Vic and sequestered him in La Gleva sanctuary. The poet felt himself persecuted and wrote a “communiqué” to the press calling for justice. Shortly thereafter, the Church authorities banned him from officiating at mass. En defensa pròpia compiles the prose that the poet sent to the press during this period.

In 1898, the ban was retracted and he was rehabilitated. He spent his last years as an incumbent in Barcelona’s Betlem church, and he died on the 10th of June 1902 at Vil·la Joana estate in Vallvidrera (Barcelona).

Verdaguer’s literary production, which was written over the course of forty years and falls within the Romantic literary principles, primarily revolves around poetry, with more than 30 titles including those published both during his lifetime and posthumously. He also wrote several prose works boasting extraordinary literary quality, as well as prose and verse, along with several translations and versions from other languages. Unpublished works have been issued since his death, and among the thousands of manuscripts which he left, there is still a range of more or less finished poems and prose works that have not yet been printed. All of this is coupled with an extensive, fascinating epistolary encompassing more than 1,500 letters, most of which has already been published. We can divide his works into three stages.

At the Seminary, Verdaguer wrote his first humoristic and satirical poems (Goigs de sant Taló). He also wrote popular pastoral and love poems – which are known partly thanks to the posthumous compilation – among which Amors d’en Jordi i na Guideta (1865) stands out for its length and ambitiousness. This poem was Verdaguer’s attempt to imitate the Mirèio by the Occitanian poet Frederic Mistral. After being ordained a priest, he started his religious and patriotic poetry – with which he won prizes at the Jocs Florals of Barcelona in 1865 and 1866 – and his first epic poem, Dos màrtirs de ma pàtria (1865). Also from this time are an entire series of trial runs and other preparatory materials for the L’Atlàntida, as well as several autobiographical prose pieces. During this period of his life, his literary activity centred around religious poetry, both popular and cultivated, historical-patriotic poetry and writing the L’Atlàntida. In 1877, he won a prize in the Jocs Florals of Barcelona for L’Atlàntida, which enshrined Verdaguer as the leading Catalan poet of his era.

L’Atlàntida earned renown both nationally and internationally. He also became the most important religious poet in the country with Idil·lis i cants místics (1879). Both perennial themes in Verdaguer’s output, religion and the fatherland, are present in the next two works which were published in 1880: Llegenda de Montserrat and Cançons de Montserrat. In 1883, he submitted one of his most famous short epic pieces to the Jocs Florals of Barcelona: the ode A Barcelona, a paean to the dynamism of both the city and Catalonia. The work was a resounding success and the Barcelona Town Hall issued a special edition with 100,000 copies of the text. In 1882, he published another religious poem, Lo somni de Sant Joan, and in 1885 he came out with a poetic book of circumstances, Caritat, to help the victims of the earthquake in Andalusia that same year.

In late 1885, he published his second major epic work dated in 1886, Canigó, the author’s peak poem. More humane and realistic than L’Atlàntida, despite the long digressions that appear in the poem, it has an internal architecture based on symmetries and a metric variety which enable the epic-military and lyric-amorous spheres to remain separate yet coherent.

In the 1880s, Verdaguer also wrote numerous devout works which often appeared on loose sheets and were partly compiled in Càntics (1882, 1889), as well as civil, patriotic poetry, which is also partly compiled in Pàtria (1888). His travels during this period gave rise to two prose books: Excursions i viatges (1887) – a compendium of his trips to northern and Central Europe, the African coast and the Pyrenees – and Dietari d’un pelegrí a Terra Santa (1889).

The poet entered this era immersed in a personal crisis, and his literary activity came to a partial halt. His works published in the early 1890s were virtually limited to a trilogy on Jesus’ childhood: Natzaret (1890), Betlem (1891) and La fugida a Egipte (1893), which were later compiled into a book entitled Jesús Infant (1896). He abandoned epic and historical-patriotic poetry and focused on religious poems, which now became more intimate with predominantly short works. The books Roser de tot l’any and Veus del bon pastor (1894). date from this period. When he was stripped of his permission to celebrate mass, he felt bitter and wrote two series of journalistic articles compiled in En defensa pròpia, the poetry compilation Sant Francesc (1895) and Flors del Calvari (1896).

Once he had earned back permission to celebrate mass (1897), he began to write feverishly to restore his reputation, which had been harmed by the conflict. He contributed to numerous publications, participated in activities, prepared new poetry books, revised previous ones and published a few new ones, including Santa Eulària (1899), Aires del Montseny (1901) and Flors de Maria (1902), the latter published shortly before his death. Posthumously, several books that were almost finished appeared, including Al Cel (1903), Eucarístiques (1904), Càntic dels càntics (1907) and Perles del Llibre d’Amic e Amat (1908). Brins d’espígol (1977) and Pomerola. Primavera were published quite a bit later (1995 and 2013).

Verdaguer’s extensive, rich oeuvre has made him the most prominent writer of the entire 19th century and unquestionably one of the classic Catalan authors of all times. The quality and timelessness of Verdaguer’s output is matched by its historical importance. And also worth bearing in mind is his enormous popularity, which has even led to a poet-people symbiosis that has turned some of his compositions – “L’emigrant”, “El noi de la mare” and “El virolai” – into works known by everyone, even if they are often recited without knowledge of who their author is.

The Complete Works and Critical Edition collection (abbreviated OCEC) presents the established texts and the study of his oeuvre by the top experts for each of the author’s titles. Each volume has two parts: the established text with annotations, preceded by a preliminary study, and related documents. It was published under the aegis of the Societat Verdaguer through Verdaguer Edicions.

The latest initiative in terms of the author’s complete works, by Edicions Proa (2002-2006), has made almost all of Verdaguer’s works accessible. It contains four volumes under the general heading Totes les obres and the individual titles “I. Prose”, “II. Long Poems. Theatre”, “III. Poetry 1” and “IV. Poetry 2”. The editors of this work are Joaquim Molas and Isidor Cònsul, with contributions of several scholars.